COVID-19 Pandemic: The corona virus pandemic (2019–20) as a new type of coronavirus (2019-nCoV) infection began in mid-December 2019 in Wuhan city, China. In Wuhan city, people started having pneumonia without any reason and it was seen that most of the victims sell fish in the Wuhan Sea Food Market and also trade live animals.

Chinese scientists later identified a new breed of coronavirus that was given the 2019-nCoV initial designation. This new virus found at least 70 percent of the same genome sequences found in SARS-Coronavirus.

With the development of a specific clinical PCR test to detect infection, several cases were confirmed that were directly related to the market and which were not directly associated with the market. At first, it was not clear whether this virus is as serious as SARS or fatal.

By March 14, 2020, there were about 5,800 deaths in the world. There has been evidence of the virus spreading from China to humans all over China. As of 9 February, a comprehensive trial had revealed more than 88,000 confirmed cases, some of which were also health workers. By 20 March 2020, confirmed cases were reported in Thailand, South Korea, Japan, Taiwan, Macau, Hong Kong, the United States, Singapore, Vietnam, India, Iran, Iraq, Italy, Qatar, Dubai, Kuwait and other 160 countries.

On 23 January 2020, the World Health Organization decided against declaring the outbreak to be a public health emergency of international concern.

The sudden rise in the incidence of the disease raised questions related to uncertainties about its origin, wildlife trade, the spread of the virus and the possibility of its loss, whether the virus has been spreading longer than before, and its Is likely to happen. A super spreader. the outbreak. Is the event.

The WHO was first reported to have suspected cases on 31 December 2019, only three weeks before the first cases of symptomatic disease were reported on 8 December 2019.

The market was closed on 1 January 2020 and people with signs and symptoms of coronavirus infection were isolated. More than 700 people, including more than 400 health workers who came in contact with potentially infected individuals, were initially monitored.

Following the development of a specific clinical PCR test to detect the infection, the presence of a later 2019-NCOV was confirmed in 41 people in the original Wuhan groups, two of whom were later reported to be a married couple. Was found. One of which was not present in the market and three others who were members of the same family who worked at the market’s seafood shops. The first confirmed death from coronavirus infection occurred on 9 January 2020.

On 23 January 2020, all public transport into and out of Wuhan was suspended. Nearby cities Huanggang, Izhou, Key, Jingzhou and Zhejiang were also excluded from January 24.

The spread of the corona virus was declared a public health emergency of international concern by the World Health Organization on 30 January 2020, a type of emergency that is the sixth emergency by the WHO since 2009 H1N1. 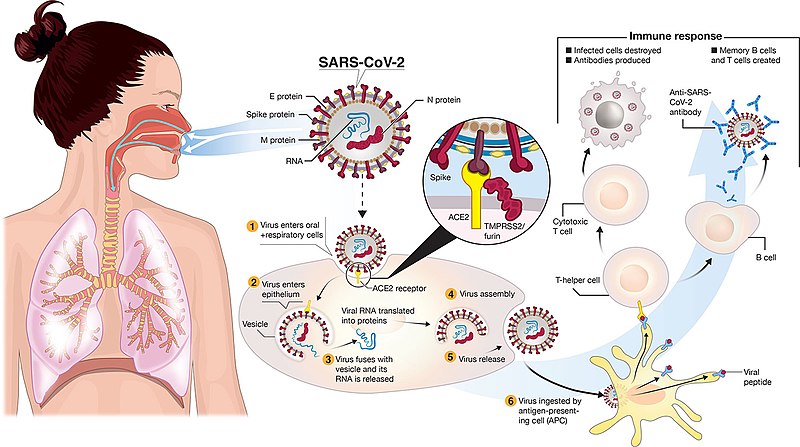 In January 2020, WHO recommended 2019-nCov Acute Respiratory Disease, which is a geographic location (eg. Wuhan, China), with 2015 guidance against the use of animal species and an interim name for viruses and disease according to international guidelines.

Explained: CO for corona, VI for virus, D for disease and 19 for when the outbreak was first identified (31 December 2019). 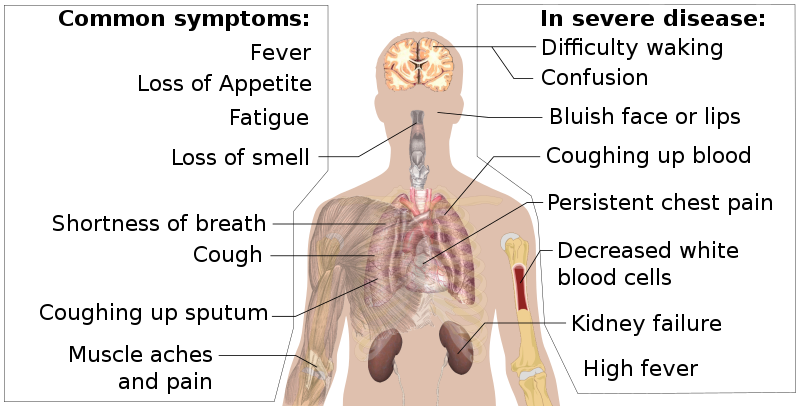 People with the same infection may have different symptoms, and their symptoms may change over time.

Three common groups of symptoms have been identified: a respiratory symptom group with cough, sputum, shortness of breath, and fever; A musculoskeletal symptom group with muscle and joint pain, headaches, and fatigue; A group of digestive symptoms with abdominal pain, vomiting and diarrhea.

In people with no ear, nose, and throat disorders, taste impairment is associated with loss of taste as well as COVID-19.

Among those who show symptoms, 61% develop only mild to moderate symptoms (up to mild pneumonia), while 18% develop severe symptoms (dyspnea, hypoxia, or more than 50% lung involvement on imaging). And 5% of patients have severe symptoms.

At least one-third of people who are infected with the virus do not develop noticeable symptoms at any time. These asymptomatic carriers do not undergo testing and can spread the disease. Other infected people will later develop symptoms, known as “pre-symptoms”, or have very mild symptoms and can also spread the virus.

As is common with infections, there are delays in the first time a person becomes infected and the first symptoms appear. The average delay for COVID-19 is four to five days. Most symptomatic people experience symptoms within two to seven days of exposure, and nearly all will experience at least one symptom within 12 days.

Most people recover from the acute phase of the disease. However, some people continue to experience a range of effects – called long COVID – and organ damage has been observed for months after recovery. Multi-year studies are underway to investigate the long-term effects of the disease.

COVID-19 Causes: SARS‑CoV‑2 belongs to a broad family of viruses known as coronaviruses. It is a positive-sense single-stranded RNA (+ ssRNA) virus, consisting of a single linear RNA fragment.

On 11 February 2020, the International Committee on the Classification of Viruses announced that according to current regulations that calculate hierarchical relationships between coronaviruses based on five conserved sequences of nucleic acids, which were then called 2019-nCoV and 2003 SARS . Virus outbreaks were insufficient to make them distinct viral species.

The particles vary in size, from small aerial particles that can remain suspended in the air for hours and large droplets that quickly fall to the ground. Transmission occurs when the particles breathe, or when they are directly exposed to the mucous membrane on the eyes, nose, or mouth (for example, cough) or from touching with contaminated hands. People remain contagious for 20 days, and they can spread the virus even if they are not symptomatic.

The closer people interact, and the longer they interact, the more likely they are to transmit COVID-19, but the infection may occur only a short distance away. The transmission risk is highest where people are in proximity (within 2 m) and decreases with increasing distance from the source and increasing time after exhalation.

Airborne transmission over long distances is particularly capable of occurring indoors, in locations that are poorly ventilated or where activities have increased (such as restaurants, choir, gyms, night clubs, offices, and religious venues). In those situations small particles can remain suspended in the air for minutes to hours.

Usually the number of people infected by an infected person varies; Only 10 to 20% of people are responsible for the spread of diseases. However, in September 2020, it was estimated that one infected person would, as a crude average, infect between two and three others.

It is more contagious than influenza, but less so with measles. It often spreads in groups, where an infection can be detected in an index case or geographic location. “Super-spreading events” have a major role, where many people are infected with one person.

A person who is infected can transmit the virus to others up to two days before the symptoms themselves, and even if the symptoms never appear. In moderate cases, people are contagious for up to 7–12 days and in severe cases up to two weeks.

Prevention: Preventive measures to reduce the likelihood of infection include getting vaccinated, staying at home, wearing masks in public, avoiding crowded spaces, keeping distance from others, ventilating indoor spaces, managing potential exposure periods , Involves frequent hand washing with soap and water. And for at least twenty seconds, practice good respiratory hygiene, and avoid touching the eye, nose, or mouth without washing your hands.

Those who have been diagnosed with COVID-19 or who believe they may be infected are advised by the CDC to stay home in addition to medical care, call before going to the healthcare provider, Health Wear a face mask before entering the service provider’s office and before entering any room. Or cover the vehicle, cough and sneeze with another person with a tissue, wash hands regularly with soap and water and avoid sharing personal household items.

How does COVID-19 spread among people?

We know that the disease is caused by the SARS-CoV-2 virus, which spreads to people in many different ways.

The virus can spread to small liquid particles from its mouth or nose when an infected person coughs, sneezes, speaks, songs or breathes. These particles range from large respiratory droplets to small aerosols.

People can also become infected by touching surfaces contaminated with the virus when they touch their eyes, nose or mouth without cleaning their hands.

More research is underway to better understand the spread of the virus and what settings are most risky and why. Research is also underway to study the types of emerging viruses.

When do infected people transmit the virus?

Whether or not they have symptoms, infected people can become contagious and the virus can spread from them to other people.

While a person who never develops symptoms may pass the virus on to others, it is still unclear how often this occurs and more research is needed in this area.

What is the difference between asymptomatic or pre-symptomatic people?

Yes, any situation in which people stay close to each other for a long time increases the risk of infection. Indoor locations, especially in settings where there is poor ventilation, are riskier than outdoor locations.

Activities where more particles move out of the mouth, such as heavy breathing during singing or exercise, also increase the risk of transmission.

“Three C’s” is a useful way of thinking about this. They describe settings where transmission of COVID-19 virus spreads more easily:

Disclaimer: Our website (dreamgyan.com) is not a government-run website nor does it have anything to do with any government ministry. All trademarks, service marks, trade names and logos, images appearing on the site are the property of their respective owners. If there is an error in an article, you are requested to tell us. Read More...
DMCA: All the material available on this site which is available for education and general purpose only. All information is collected from various opensource platforms (Internet, newspapers, magazines, books etc.). The backlink / reference to the original content source is given below each content with the label "Source".
For copyrighted material, only ratings and reviews are provided. If you want us to remove your content, please click here and fill in the details.